As many of you know I am a huge proponent of pet adoption.  This is an area that is very close to my heart.  Here are some facts that I want to share with you from the ASPCA.  Numbers are based on a national count and vary from state to state.

These estimates are based in part on Shelter Animals Count data and other known and estimated sources, 2015-2018.

I share this information with you because even though the number of unwanted pets in U.S shelters is going down, there are still 1.5 million dogs and cats being killed each year.  Some sources say its actually as high as 2.7 million.  Now I know that some of those animals are really sick or injured and some have been so abused or neglected their behavior issues cannot be reversed.  I volunteered at a local shelter for two years and that was something I had to learn to come to terms with.  My heart still goes out to those furbabies.  We need to work harder to help the ones that are healthy find their furever homes and educate about the importance of spay and neutering among other issues. 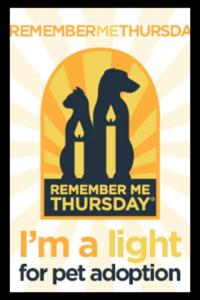 This coming Thursday, September 26th is “Remember Me Thursday”.  This is a worldwide campaign going into it’s seventh year.  It was started by the Helen Woodward Animal Center in California.  “Remember Me Thursday” was created to raise awareness and be the voice of the many millions of beautiful, loving, unwanted pets that are waiting in shelters across this country for someone to come adopt them and love them forever.  So to help bring light to this fabulous campaign, I want to share one of our adoption stories with you.

Iggy is one of our three rescued Chihuahuas.  We adopted him back in the Fall of 2012 along with his kennel mate Oliver.  The year prior, two of our dogs had passed away within months of each other.  It was a heart breaking time.  Even though we still had our German Short Haired Pointer, Hank and his Chihuahua baby brother, Percy it felt like there was a hole in our tribe.  One day I talked my son into going down to the Denver Dumb Friends League with me to “take a look” at a Chihuahua we had seen on their web site.  This possible adoptee was Oliver.  The volunteer that was helping us suggested that we also visit with Oliver’s kennel mate Iggy.  My son and I were pretty sure that we wanted to adopt Oliver and convinced my husband to join us at the shelter when he got off of work.  When hubby got there we still had both pups with us in the visiting room.  Hubby fell in love with Iggy!  Great now what were we going to do?  Well our very helpful volunteer informed us that the shelter was running an adoption special!  …Of course they were.  The adoption fee for all adult dogs was cut 50%.  So basically we could adopt BOTH pups for the same price as one!!!!  Problem solved :). 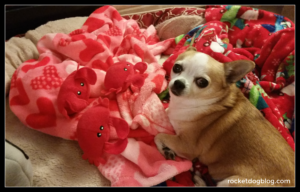 We have adopted a number of dogs and cats over the years.  We bring them home, love them, fed them, spoil them rotten, etc but let them settle in and just be for awhile.  With our little Iggy this settling in period lasted almost five years.  Iggy wanted to be loved, but just could not handle the stimulation of being petted or held and would strike out and bite any of us, seemingly without warning.  He was lighting fast and occasionally break skin with his tiny teeth.

Our daughter was away at college when we added Iggy to our household so she was not around very much and he struggled to get used to her.  She was basically a stranger every time she came in.  When she did come home on breaks, Iggy would sit across the room from her and growl at her.  Now I know what you are all thinking – Why in the world would you keep a dog that bites?  Well the answer is pretty simple.  If we left Iggy alone he was fine and content.  If he chose to let us interact with him and pet him we learned the signs that he was over stimulated and ready to bite.  He didn’t randomly bite or attack out of nowhere.  He also wasn’t aggressive with our three other dogs or our cats.  It was all very manageable.  We also knew that we had made a commitment to him and if we took him back to the shelter he would be put down.  There was no reason for that to happen.  We would be happy giving him a safe and loving home with as much or as little human interaction as he could handle. 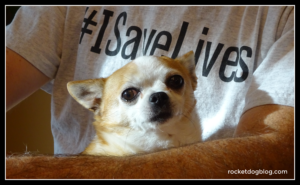 Two years ago a miracle happened.  One day, like a switch was thrown, Iggy became a major love bug with my husband!  He would let my husband pet him all along his shoulders and chest as well as lean into him and ask for more.  All of this with out any biting.  Up until this point we could only stroke his head and back once or twice and would have to stop or risk the consequences.  This was such a major break through for Iggy.  Fast forward to today and Iggy has become my love bug too.  🙂  He loves to sit on my lap or backs his little butt up to me on the sofa when we watch TV.  I can pet him all over and gently snuggle him.  Our son can hold Iggy but still isn’t allowed to pet him more than just a couple of strokes, it’s getting better.  Iggy is still very wary of strangers so we always tell people not to pet him but we have high hopes for this little one.

Even though Iggy had a rough start he has brought so much joy into our home.  He is a funny little guy and can make you smile many times a day.  His personality is hilarious and fun!  I am so glad that we added him to our tribe, even though that wasn’t our original plan.  We didn’t give up on him and send him back to the shelter, and that has paid off in spades with this funny, loving little guy.  Both his life and ours have been made better because we chose him, and after five years… he chose us.

I love to share our adoption stories.  Every companion animal we currently have or loved in the past has been a rescue and each one has brought their own special personality into our home.  A couple of weekends ago I was out with some friends scrap-booking and the topic of dogs came up.  Shock, I know!  My friends didn’t know that, in addition to the wonderful mixed breeds you can adopt, there are many pure breeds that are available for adoption too.  I know that the Denver Dumb Friends League has a special pure-breed program that you can sign up for but there are also pure breed rescues out there.  Our dog Hank came from a GSP rescue in Penrose, Colorado.  Our daughter’s dog Bianca was a Bull Terrier that came from a rescue via Florida.  If you are interested in a specific breed, just Google rescues for that breed.  You will be surprised at how many there are.

So this coming Thursday, September 26th join me and millions of other people across the globe to celebrate the pets that have been rescued and found their furever homes.  But let us also remember the millions of unwanted pets that are waiting in shelters for their chance at love. 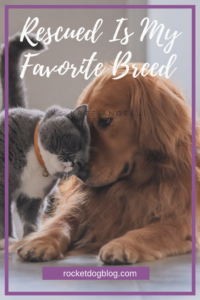 Here is more information on “Remember Me Thursday” 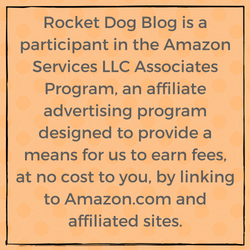